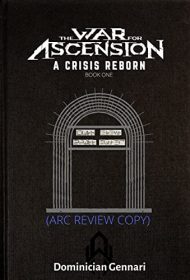 A seamless fusion of adventure fantasy and science fiction, this first installment in Dominician Gennari’s shelf-bending War for Ascension saga follows an unlikely group of heroes as they attempt to stop a mythical evil entity from throwing their planet—and the entire universe—into eternal darkness.

Thousands of years after most of the population of the planet of Númaria was annihilated by a nuclear weapon designed and set off by the malevolent Ahstra, whose “heart is blacker than the deepest regions of the cosmos,” the malign force is back to finish the job.

Ahstra and his armies’ goal is to find the location of an all-powerful artifact known as the Silomir and identify and destroy a duo of reincarnates, a group that includes people who unknowingly possess the spirits of the legendary King Ademantius and Queen Nevitari. The duo—an acclaimed Torian martial arts fighter named Areus (Torians live for thousands of years while “mortals” only live for 100) and Belvara, a young gymnastics teacher—recognize quickly that a silent war is being waged against them.

After realizing their true identities, they join forces with others to recover and destroy the Silomir before Ahstra finds it. Standing in the way, however, are legions of nightmare-inducing monstrosities relentlessly pursuing them.

Numerous noteworthy elements are at work here. The pacing and amount of action and adventure is impressive, especially considering the 833-page length. The overall world-building is laudable, particularly the philosophical implications of the multidimensional totality known as the Hydroverse, essentially a fully aware and totally interconnected universe.

The two main characters, however, are a bit too formulaic. Well-read fantasy fans won’t find anything remarkable or memorable about these characters. The story does include, however, some intriguing and emotionally compelling supporting characters. Ryaklesian the Ranger and Santia, Areus’ wizard-like mentor, both steal the show.

Overall, this is a promising first installment to what could be a highly entertaining saga for fantasy and science fiction fans alike.