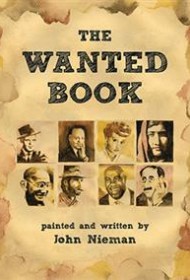 The Wanted Book is a collection of brief profiles of inspiring public figures with a compelling spin: It presents each individual profiled as the subject of a “wanted” poster.

This oversized book with a glossy veneer features a “wanted” poster on each left-hand page and text discussing each “wanted” individual’s most memorable mark on the world on the right-hand page. One poster, for example, reads: “WANTED / more people like Harry Truman / who instinctively knew where the buck stopped.” From Lucille Ball and Steven Spielberg to Stephen Hawking and Nelson Mandela, the book features a wide range of individuals.

Unfortunately, the biographical content is marred by an inconsistent writing approach. For example, Bill Gates’ profile carefully documents his entire life, while George Gershwin’s doesn’t discuss his life, training, or even note that he was a pianist or composer. Rather, it lists the titles of some of his most popular songs. The profile of JFK is written as a letter to the former president and includes memories of the author’s mother’s reaction to the Cuban Missile Crisis (without explaining to readers what that crisis involved).

The Wanted Book includes welcome surprises, such as young activist Malala Yousafzai and entrepreneur Elon Musk. One wishes, however for more diversity. Of the 58 profiles, only 18 are women and 15 are people of color. Additionally, there seems to be a bias for certain professions (i.e., of the six sports heroes featured, four are Major League Baseball players). Combined with some inappropriate language (“bimbos” are mentioned multiple times) and references to extramarital affairs, such flaws prevent the book from being a solid educational tool for children. A young readership would seem the most appropriate audience for the concept.

The Wanted Book presents an interesting idea. With thoughtful revision for consistency and balance, it could offer children a fun route to discovering inspirational American figures. It requires further polish, however, to hit that mark.