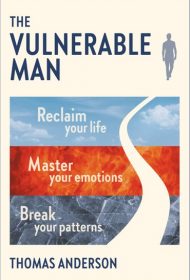 Although Thomas Anderson had a good job, family and friends, he felt something was missing. He describes his mission to reorder his life in The Vulnerable Man.

This self-help book, Anderson writes, aims to share his path and help readers live a fuller life. He discusses excerpts from his diaries from 2014 to 2018, then explains how those feelings and events reshaped him.

Now an engineer, life coach and inspirational speaker, Anderson categorizes himself as a Highly Sensitive Person, a personality trait that results in absorbing others’ negativity and pressuring oneself in work or family relationships, among other manifestations. On the outside, Anderson seemed fine. Internally, though, he was terribly conflicted, as one diary entry shows: “Get away from all the musts, all the doing, pushing forward, worrying about failure, worrying about letting people down. If I fail, I’ll never get to do anything fun again, [sic] what if they discover that I’m a fraud.”

Through discussions with friends, yoga, exercise, inner resolve and other means, he began to change. He gave himself “me time,” stopped taking on others’ problems, learned to say no and allowed himself to be vulnerable. He divorced his wife, changed jobs, found an entirely new approach to life that made him happier and healthier.

The author’s narrative, while clear, is sometimes repetitive—for example, when discussing the uncertainty about starting his own business, or his ambivalence about whether to divorce. Tightening these areas would let readers get to the meat of his lessons quicker.

At book’s end, Anderson offers a useful self-reflection workbook with headings such as “Discerning Patterns,” “Vulnerability,” and “Reclaiming Your Life.” He includes lists of questions readers can work on solo or with a group, and for further study, he provides a list of books.

Readers of self-help books have likely encountered many of the lessons found here. Still, Anderson’s candidness is highly relatable, and following even a few of his suggestions can make for positive change.