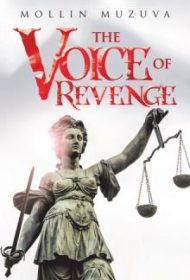 The desire to even the scales of justice when we’re hurt can be all-consuming. In The Voice of Revenge, author Mollin Muzuva relates a tale of cruelty and one man’s lifelong search to repay it.

Muzuva tells the story of young Methuselah Tyker, an only child who lives with his doting parents in a Botswana village. The young boy gets into a schoolyard fight with a girl who dies in her sleep a short time after, and her parents consult a witch doctor, who blames Methuselah’s parents. The village chief orders them hanged, and Methuselah is orphaned. Depressed and suicidal, he hears his father’s voice advising him to keep living and avenge his parents’ deaths. The rest of the story leads up to his taking that revenge.

Readers will quickly become invested in Methuselah’s plight. He’s an innocent victim, and his quest for revenge propels the story along nicely. From a crushing depression, he develops the will to live in order to put things right.

While Muzuva’s writing is nearly error-free (although there’s one inconsistency when the witch doctor is first described as being bald, then as having dreadlocks), the author uses an abundance of clichés; in just two paragraphs we find “fresh as a daisy,” “busy as bees,” and “on top of the moon.” More description of Botswana and Methuselah’s Serowe village would vastly enrich the story and allow readers to learn things from context rather than from awkward narrative additions like, “…said Paul, one of Methuselah’s friends.”

Still, this is a generally fast-paced and absorbing read, and the book’s final passage ends the story with a bang. Overall, The Voice of Revenge gives us a protagonist we care about and a classic tale of the quest for justice that will leave readers wanting more. If Muzuva decides to write a sequel, readers would eagerly follow Methuselah’s continuing life journey.