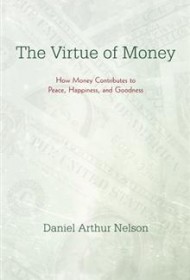 Daniel Arthur Nelson comes from a blue-collar background where adequate earnings apparently became an everyday concern. He says he labored multiple years in a foundry for low wages before managing to obtain a college degree in computer science from Point Park University in Pittsburgh.

Nelson’s book (actually a mid-length essay) argues that earning enough money to live without constant worry is better than worrying about money. That seems obvious, yet Nelson has come to the conclusion that many believe otherwise. The main culprits spreading this widespread belief, he notes, are “some religions and even some New Age philosophers.”

Nelson writes clearly, so his heartfelt belief in the positive power of adequate income comes through clearly. The problem with the book as a polite polemic is that Nelson is battling against metaphorical straw men. He never presents a solid case that many live their lives according to maxims such as, “Money does not contribute to peace of mind.” Instead, he simply notes that this is true and quickly moves on in his argument.

The essay, which also offers random advice about how to be smart about money (choose a college major that will lead to adequate income, educate yourself about finances, etc.), is filled with repetition, as the author restates his premise using varied language. For example, Chapter One introduces the idea that there “is nothing wrong with the simple desire of wanting financial success…” Chapter Two approaches the same material from the perspective that there is “no virtue in poverty.”

The most interesting portions of the text arrive when Nelson reveals tidbits about himself. After graphically describing his period of poverty when he worried about affording repairs to his automobile, for example, he reveals that he has paid cash for three consecutive new automobiles in his later years.

Nelson believes his book carries the potential to increase happiness among his readers. It is a lucid, if seemingly unnecessary, pep talk.