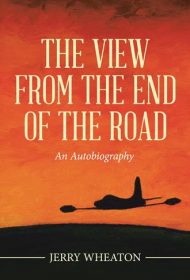 Approaching his 100th birthday, Jerry Wheaton tells his life story in The View from the End of the Road.

A graduate of Colgate Medical College and Harvard University during WWII, Wheaton became a family physician in rural Ohio, where he frequently was paid in farm produce and livestock. When the Korean conflict ended, he was called to active duty by the U.S. Air Force. He remained in the service until 1975, rising to the rank of colonel. For the next 30 years, he served in a variety of government and corporate public health positions around the world.

His nearly 80-year career has numerous high points. He was ordered to accompany two men scouting areas of Southeast Asia before the Vietnam War; as a doctor, he provided cover for the men on a four-month foray to Burma, Thailand, China, Laos and Vietnam. When a U-2 spy plane disappeared, he was tasked with recovering the pilot’s body from a mountain in Peru. Even in his postings at various bases and hospitals, he found innovative solutions to vexing problems.

The trouble with his narrative, however, is that it’s simply too long and detailed. For example, on reporting to a new base, he painstakingly reports: “I parked by the building to get my bag out of the trunk and climb the wide wooden steps to a double door. I opened one to step inside. I found myself facing another set of double doors on the other side of a large entryway…” Dozens, if not hundreds, of people pass through Wheaton’s story; the volume of names sometimes becomes difficult to follow.

The text is replete with typos, confusing sentences (“He had a wife without a two children”), random capitalization and apostrophes. On occasion, a person’s last name changes from page to page.

As such, this thorough recap of a long, distinguished career is likely to overwhelm general readers. Still, this in no way detracts from Wheaton’s accomplishments, which the author and his family should rightly celebrate.