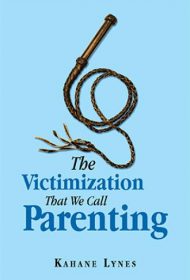 The Victimization That We Call Parenting addresses Kahane Lynes’s ideas of what it means to be a parent.

A father of four, Lynes states in the book’s beginning that “There are few good parents in America today,” adding on the back cover that parents are “the ones responsible for screwing up society, and creating rapists, murderers, and abusers.” To stop this, we must to “find a way to correct our problems.”

His book discusses parenting in individual chapters, starting with “Newborn-Age Two” and going through age 18. Occasionally, he offers useful advice, such as: answer your kids’ never-ending questions, don’t panic, admit when you’re wrong.

But the book’s extreme negativity overshadows any benefits. Lynes expresses disdain for educators, writing that “Most [school] administrators are just there for a check” and that teacher planning days are “about finding creative ways to aggravate the hell out of us.”

Children also become targets of his tirades, as when he states in the “Age Eight” chapter: “If they’re satisfied with us, they might let us hold their hands” and, just after praising nine-year-olds for showing more maturity, chastises them for not taking out the garbage “because the twenty steps out and back are way too difficult.” Lynes also makes insulting judgments about certain groups, asserting that black people suffer from mental illness due to slavery and that parents with more than three children are perpetrators of “mass production.”

Just when we’re convinced Lynes’s ranting is completely unwarranted, he reveals the raw memories of his single mom’s cruelty, his gang involvement at age 13, and his struggle to rise above his upbringing. This is by far the best part of the narrative and helps us understand his lifelong frustrations. Unfortunately, it comes too late to save the book.

Had Lynes shared even an inkling of this sooner, readers would have been more empathetic to his viewpoint. As is, The Victimization sags under the weight of its negativity.