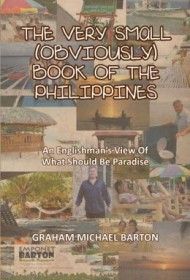 Graham Michael Barton is an Englishman who made his living selling weapons, arms and armory to movie crews. After retiring, he moved to the Philippines to open a beach resort on an island called Higatangan. The Very Small (Obviously) Book of the Philippines is a collection of essays written about his experiences there, its subtitle reflecting the book’s acerbic tone (An Englishman’s View Of What Should Be Paradise).

Barton describes his book as “slightly cynical…designed to entertain, amuse, and perhaps even tempt you to visit the Philippines,” but that’s not how it reads. The essays reflect a seeming disgust for the people, the culture and even the weather. Except for the rainy season, when typhoons lift huts off their foundations, people are left panting and sweating by the eye-searing heat, he writes. The pace of life is exasperatingly slow; the pests include rats and flying cockroaches.

Barton insults Filipinos throughout the book, referring to them as “very noisy, small brown people chattering in unison at a high-decibel level” and “a relentless horde of small brown termites.” He reports on their voracious appetites, laziness, lack of hygiene and penchant for cockfighting, defecating in the ocean, and ripping off tourists. He writes, “Never trust a smiling cat or a Pinoy [his word for “Filipino”].”

A few chapters contain a rare bit of amusing storytelling about such things as local remedies, the grave of an unknown fisherman, and the day his neighbors used his hydraulic lift to carry a coffin to the cemetery. Perhaps they’re the part Barton refers to when he describes his book as “an affectionate tongue-in-cheek look at this fascinating yet sometimes annoying group of islands.” However, because the vast majority of his stories are snide, crude and even mean-spirited, despite his stated intentions, the reader is left wondering why Barton stays in a place he seems to detest.