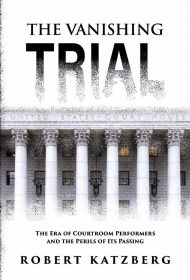 Ben Brafman, Jimmy LaRossa and Gustave Newman aren’t household names. But they are considered giants among their trial attorney peers because of their penetrating intellect and mesmerizing court performances. It won’t be long, warns The Vanishing Trial’s author Robert Katzberg, before lawyers of their caliber become a dying breed.

Katzberg has practiced law for 40 years, litigating high-profile cases. His core message centers on the fact that jury trials at the federal level are rapidly being replaced by plea bargains, due in part to rigid Federal Sentencing Guidelines that now mandate mandatory minimum sentences. As a result, defendants often opt for plea bargains that offer the prospect of much less prison time. This means attorneys are losing a venue in which to hone their trial skills. Additionally, it threatens our democratic principles built on the belief that average citizens—represented in a jury of the defendant’s peers—should have the power to decide guilt or innocence.

Katzberg presents most of this discussion in a few chapters at the back of the book. He devotes the rest of his narrative to sharing vignettes from his association with some of the best trial attorneys in the nation. He paints glowing portraits of such legendary lawyers as Patrick Tuite and Brafman—showing how their skills and acumen undoubtedly far surpassed their peers, while acknowledging that this was largely because of the huge number of cases they argued.

Told with an engaging voice and quick wit, Katzberg discusses court cases involving mafia heavies, white-collar criminals and an assortment of well-dressed clients with checkered backgrounds. His love for the often-pugilistic process of arguing a case is palpable and underscores the urgency of his message regarding eliminating the jury-driven federal justice system.

Readers looking for a deep-dive into all the implications of the Federal Sentencing Guidelines may feel disappointed by Katzberg’s narrative. But those who appreciate anecdotes about some of the best trial lawyers in the profession, told with humor and admiration, will find this book a delightful, fulfilling read.