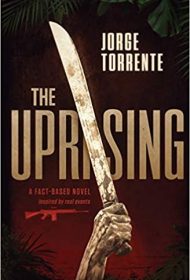 Set in Cuba before, during and after the CIA-backed Bay of Pigs invasion aimed at overthrowing Fidel Castro, this violent, tragic and suspenseful novel opens to family conflict shortly after Castro seizes power in 1959. “No one can deny that Fidel’s triumph is anything short of miraculous,” declares Elpidio García, to which his elderly father replies prophetically “He’s no saint.”

Indeed, when the new regime’s agrarian reform policy threatens the García ranch with confiscation, the miraculous turns disastrous, and Elpidio disappears into the Escambray Mountains to take up arms against Castro’s regime. The narrative then goes to war, where it sometimes stumbles with too many combat tales and a stilted viewpoint of the conflict in absolute terms: all good verses all evil.

Eventually, Elpidio and his tiny band, let down by their allies and nearly overwhelmed, find themselves facing a choice between likely martyrdom and the far less likely possibility of escape from the island they love and abandoning all hope of victory.

Throughout the story, the author concentrates on the motivations behind each rebel’s commitment to the battle. There’s Rosa, vowing vengeance ever since Castro’s forces killed her father years before, while also struggling with sexual longings; Luis, a doctor, who leaves the safety of Miami and his newly pregnant wife for a CIA-run camp in the Everglades to train for the invasion; and Néstor, whose Jewish family fled the Holocaust and who sees all-too-familiar signs coming from Cuba and likewise joins up.

These backstories give the characters dimension and offer insight into why they fight with such ruthlessness. While history records the outcome, the brutal journey is handled with a cleverness that makes the result seem uncertain until almost the end. And while the story is specific to the time and place, it also touches on more universal themes.

Although the narrative is uneven, readers—particularly those interested in this period of history— will find much to appreciate in these pages.