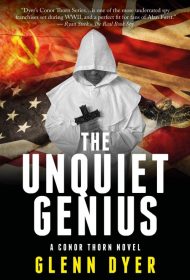 In 1938, famous nuclear physicist Ettore Majorana left a note to his family that he was about to commit suicide. When he disappeared, after purchasing a ticket for a boat trip from Palermo to Naples, everyone believed he was dead. But his body was never found. What if he didn’t die but went into hiding? Author Glenn Dyer takes up that story in this John LeCarré-esque historical spy thriller.

As the story begins, OSS Operative Conor Thorn (Dyer’s protagonist in previous books) is in England, trying to get his lover, MI6 Agent Emily Bright to marry him, despite her reluctance because of their high-risk jobs. A few days later, when a pipe bursts in an Italian monastery, a plumber overhears the name Majorana spoken in a conversation. Aiming for a reward, he tells his brother-in-law, a high-ranking official with the Italian political police, and the story quickly spreads.

The action really heats up when Thorn is briefed that Majorana—who would give the advantage to anyone developing an atomic weapon—could be alive. He’s also told the Germans have sent their atom bomb specialist (and Majorana’s friend) Werner Heisenberg to Italy. Instructed to find Majorana “before the Nazis do,” Thorn is sent to Italy, soon learning that the British, Russians, Italian fascists, and Papal authorities are also looking for Majorana.

As everyone scrambles to find the scientist, Thorn, Bright, and their friend, Father Sean Sullivan, navigate a complex web of intrigue and double-crossing that sends them to the Certosa di Trisulti monastery, where a Brother Ettore Bini bears a striking resemblance to Majorana.

The story alternates between various characters’ viewpoints. Throughout, the author takes readers to historically accurate settings in PBY-5 flying boats, RAF C-47 Dakota aircraft, and more, including appearances by real-life figures such as Winston Churchill and Enrico Fermi. The pace is measured, the dialogue and characters believable, and there’s enough shoot-‘em-up here to satisfy any reader—although occasional melodramatic writing, a few inconsistencies and other minor writing gaffes can be distracting.

Nonetheless, Dyer has taken a relatively unknown but fascinating piece of WWII history and vividly brought it to life.