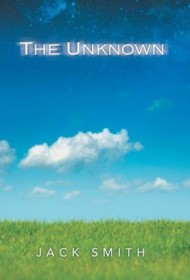 In The Unknown, author Jack Smith juggles a multitude of plot threads to create a novel of mystery and suspense.

As the story begins, a woman is running from an unknown assailant. Just as he closes in, the book flashes back to 25 years earlier when a homeless woman named Dora sees a limousine driver carry a bundle to a dumpster. Dora retrieves the bundle, only to discover a baby. Why was the baby discarded? She doesn’t know, but it soon becomes clear that a hit man, hired by a person with unlimited resources, is trying to finish the original job. When there’s a murder in the homeless community, Dora decides it’s time to flee.

Teaming with a homeless drunk named Doc, she approaches a mobster who likes her tarot card reading skills. With his help, Doc and Dora move away, marry and adopt baby Stacey. Twenty-five years later, Stacey has grown into a busy career woman, but the hit man is still on her trail, determined to finally fulfill his contract for his client.

Although the author’s writing style shows promise, the book suffers from several flaws: It’s overstuffed with plot, stock characters, gruesome murders, and the contrivance of tarot cards. Bothersome editing and grammatical mistakes abound. Stacey, for instance, shares her dumpster birth story with a friend some 10 pages before she herself learns of it; “querent,” a word that describes those who seek advice from tarot card readers, is spelled “querant” throughout.

Finally, readers are asked to believe that the homeless can kick their addictions simply with the right incentive; that a hit man would pursue his quarry for 25 years to protect his reputation for fulfilling contracts; that a person could be identified due to a birthmark implausibly shaped like a woman’s face.

All told, Smith needs to pare down his novel and rethink the many contrivances in order for his book to find wide appeal.