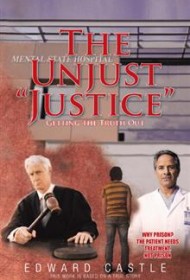 In The Unjust “Justice”: Gettng the Truth Out, Edward Castle strives to depict a justice system that is wholly unfair to the mentally disordered. The copyright page notes that the narrative is “based on a true story,” with names changed and fictitious details added, “for protection.” (It’s unclear who is being protected.)

The subject of Castle’s book, Henry Carmel, begins exhibiting symptoms of schizophrenia during his teens. Soon after, Henry kills a dog with an axe because he believes the dog is attacking him. Henry is prosecuted for this incident and another in which a neighborhood teen believes Henry threatened him with a machete. The defense attorney doesn’t include Henry’s mental illness as part of his strategy for the first case, and Henry’s schizophrenia is also given little weight during the second.

Henry is sentenced to state prison, and after serving his sentence, is deemed a danger to others and committed to a mental facility. Every year thereafter, a required hearing is held, and his commitment is renewed. By book’s end, Henry has served 14 years in a combination of prisons, hospitals and mental institutions. During this entire time, Henry’s father, Edmund, tries to demonstrate that Henry, while under medication, is not a danger, and should be released. Edmund also believes that the district attorneys assigned to his cases gravely mishandled them.

The Unjust “Justice” includes dialogue, much of it stilted and unbelievable (“Son, why you are still at home and you didn’t get up early this morning to go to Oakdale?”) and often serving only to villainize opposing parties. Long, repetitive, passages in which the author nitpicks points in testimonies and reports permeate the narrative, bogging down the story, as does Castle’s apparent agenda: to demonize those he feels wronged Henry. As a result, the story seems more interested in settling scores than in delivering compelling nonfiction.

Castle’s message is worthy, but a subtler approach would make the story more palatable, and the book requires revision to address the issues mentioned before it can engage readers.