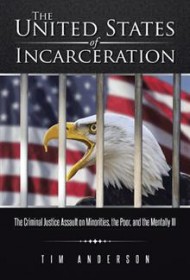 In The United States of Incarceration, author Tim Anderson warns that an insidious battle surrounding the advent of overcrowded prisons is taking hold in the U.S.  His book’s subtitle may initially mislead readers into thinking he lays the blame solely on criminal haters within the justice sector.  In fact, Anderson argues that it’s the actions of a much wider range of influential people that help America’s prison system incarcerate more citizens than any other country in the world.

Virtually every American profit center is complicit, says Anderson.  The media, legislators and a growing number of third-party suppliers all play major roles in the growth and sustenance of the Prison Industrial Complex: Sensational crime stories sell newspapers; legislators pander to the public’s fear of criminals wreaking violence in their communities, and third-party vendors profit from building and provisioning new prisons.

As the founder of the prison reform-focused Alabaster Box Ministries, Anderson’s passion is apparent. However, it’s critical that a book describing such a weighty subject flow easily, unencumbered by redundant facts and phrases.  Unfortunately, Anderson tends to hammer on particular points too long, repeating concepts that he establishes well the first time around. And his impressive body of research at times reads more like a patchwork of facts rather than the compelling narrative his book could become with a good editor. (For example, that editor would have moved the “Key Terms” definitions to the back of the book so that the well-crafted introduction could quickly pull readers into his story.) Finally, the text is in need of a thorough copyedit to correct punctuation and word usage errors.

Prison reform advocates probably won’t find any ground-breaking news here. But the book may be an eye-opener for folks with less background in this subject. Even in the face of overwhelming odds, powerful interests are committed to breaking the vicious cycle of incarceration. Despite the issues mentioned, Anderson’s book serves as a valuable megaphone for their cause.