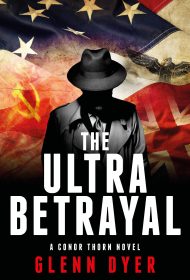 Glenn Dyer’s new Conor Thorn thriller (after The Torch Betrayal) follows the OSS operative as he searches for a missing Bletchley Park codebreaker.

It is 1942, and Swedish cryptologist Gunnar Lind, who had taken up residence in England to help the Allied war effort, has vanished, likely having turned traitor. Gunnar was working to crack the Nazis’ Enigma code, so the Allies are desperate to retrieve him. American and British intelligence enlist Conor and MI6 agent Emily Bright to track Gunnar down.

At the same time, Conor embarks on a more personal mission. He learns through a letter that his late wife, Grace, had been raped at a party a year earlier when he was away on a convoy escort mission. Tormented by guilt, which threatens his developing romance with Emily, he resolves to learn the identity of the rapist.

Accompanied by Gunnar’s cunning wife, Eve, the two agents follow Gunnar’s trail to Sweden. Faced with capture, obfuscation and political machinations, Conor and Emily stage a daring operation to get Gunnar back to England. But an even bigger surprise awaits them.

This is an exciting setup, but with a few weaknesses. A tortured operative investigating his wife’s rape is a compelling, and nontraditional, idea. Its execution here, though, feels like something of an afterthought, with resolution that comes much too easily. Likewise, a great final twist involving Gunnar’s “betrayal” of the Allies feels too sudden to be wholly satisfying.

Nonetheless, Dyer brings a fresh setting to a familiar historical period: Readers likely don’t think immediately of Sweden when the subject is WWII. The novel’s narrative is well-balanced between talk and action, and Dyer’s crisp prose moves the story along at a brisk clip. Eve, in particular, is an intriguing character, and history buffs will enjoy seeing historical figures, including Ian Fleming and Alan Turing, make appearances.

Imperfections aside, The Ultra Betrayal offers much to enjoy for fans of historical espionage.