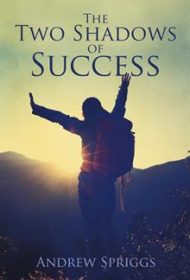 In The Two Shadows of Success, Andrew Spriggs describes his difficulty in obtaining a correct diagnosis of Bipolar Affective Disorder, a struggle made harder as he also came to grips with his sexuality.

Spriggs recalls moving from England to France for a job as a waiter, where he made friends and did well, but sometimes felt overwhelmed. In college, he had a breakdown requiring hospitalization after veering between euphoria and despair. Coming to the realization, while hanging out with a friend, that he “had feelings for blokes,” he tried to tamp down the thought and deny it at first. This made it harder for him to reach out for help; he was evasive with doctors, prolonging the process of diagnosis.

Paranoid and convinced that doctors and his parents were aligned against him, he was fortunate to finally find caring staff who helped him stabilize his mental health. Changes in his schooling and jobs seemed to trigger further setbacks, but Spriggs appears on track to wellbeing by story’s end; he now travels extensively and has friends worldwide.

There are two ways to read a book like this. On one hand, the misspellings, tightly packed, rambling passages and an instance where he calls a boyfriend by two different names in one paragraph, offer readers a sense of what it’s like to suffer as Spriggs did. You feel what “rapid cycling” means viscerally. That said, the writing issues can also become wearying. The story moves from school to job to vacation to school to job and becomes repetitive, and the typos and distracted tone make for slow going. The Two Shadows of Success would be more powerful with editing.

Spriggs wants to help others, so clarifying how he “succeeded” and has accomplished so much would be a great boon to readers. As is, however, it’s still a harrowing tale that’s hard to put down.