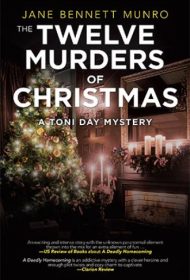 When Toni Day receives an unusual Christmas card in the mail at the beginning of the story, it does little to put her in the holiday spirit: Instead of celebrating the usual pleasantries of the season, it depicts a murder.

Toni is a pathologist with a penchant for solving crimes. The card is the first of a dozen, each referencing a murder. With help from her stepfather Nigel, a retired Scotland Yard chief inspector, and her police detective son-in-law, Pete, Toni finds a connection among the victims: Years ago, all served on the jury convicting her ex-boyfriend of kidnapping.

Toni, who’s often two or more steps ahead of the police, quickly surmises the murderer’s identity. The element of suspense remains, however, thanks to two minor characters whose actions cast doubt. If Toni is correct, her life and her husband’s could also be in danger.

Munro quickly establishes Toni as intelligent, inquisitive and stubborn, with a strong sense of humor usually spiced with sarcasm. Encountering a reporter as she returns home from an unrelated autopsy, she notes: “[H]e was close enough to smell me because he wrinkled his nose and sniffed. ‘Did you just do an autopsy?’ No use denying it, I thought, not smelling like this.”

The story is filled with Christmas ambiance: snowy weather, gift shopping, It’s a Wonderful Life. And it’s often fast-paced, despite sometimes being overly detailed (e.g., describing the rising and sitting of each character in a courtroom).

An effort to establish distinct voices for the characters, however, often feels contrived. For example, Nigel addresses Toni as “old girl”—seemingly a play on “old chap” but awkward in this context. Another character’s “I tell you what” sentence-ender seems similarly forced.

Nevertheless, the novel’s strengths—Toni’s characterization and the vivid holiday theme—outweigh any shortcomings. Readers will find this an enjoyable holiday offering.