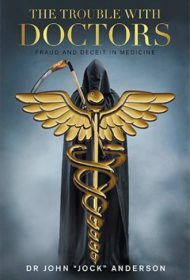 Late physician John “Jock” Anderson examines wrongdoing in his discipline in this posthumously published survey. Singling out 15 especially egregious cases of doctors who abused the trust of patients or colleagues, he paints an arresting group portrait of Hippocratic Oath-violators.

Anderson, himself a pioneer in ultrasound techniques, places the most emphasis on fraud in the world of medical research, discussing occurrences of falsified research and theft of credit for experimental discoveries. He also gives clinical practice, and malpractice, its due, highlighting instances of incompetence, negligence and outright malice.

Anderson seems reluctant to armchair-psychologize his subjects too much, but he finds some intriguing patterns in their downfalls. Some doctors fell prey to ego, finding fame early in their careers, then trying to retain it by taking scientific shortcuts. Others succumbed to simple greed, encouraging unnecessary surgeries or taking on more patients than they could handle.

While anecdotes enliven his narrative (for instance, he describes witnessing quack Sydney psychiatrist Harry Bailey hypnotize his own secretary as a kind of sinister party trick), Anderson’s storytelling is more often dry and sometimes repetitive. His profile of disgraced ENT specialist Mark Weinberger, for example, goes heavy on textbook-like descriptions: “The sinuses are paired air-filled spaces in the skull. There are two frontal sinuses above the
eyes… .”

The book also suffers from structural inconsistency problems. Anderson opens and closes most—but not all—chapters with a prologue and epilogue respectively. Almost every chapter immediately introduces the doctor in question, but the one on Paul Volkman begins with a lengthy primer on the opioid crisis before finally getting to Volkman himself.

These issues aside, Anderson offers a compelling look at moral failings of many kinds, with wide applicability outside the medical realm.