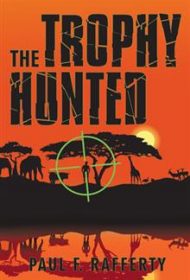 Attorney Paul F. Rafferty was moved so much by the story of “Cecil,” a lion killed by a big game hunter in Zimbabwe in 2015, that the first letters of his chapters spell out “Remember Cecil.” To articulate his reaction, the author penned this revenge thriller in the vein of a Twilight Zone episode that turns the tables on trophy hunters.

We meet protagonist Jack Mason in a domestic scene at home in Wisconsin where the chiropractor is readying to leave his wife and kids for his annual African hunting trip. Jack’s goal is to stalk a rare creature, the Black-Footed Silk Ape, and his guide in remote Amanbai indeed enables him to put the noble creature down with a well-placed arrow.

Celebrating back at the bar, Jack gets to drinking with a new friend named Monroe, who promptly spikes Jack’s bourbon martini. When Jack awakens, he’s been taken to a desolate ranch and tattooed with the words “HSR,” creepily standing for “Homo Sapiens Ranch.” It turns out that Jack and two other hunters have been kidnapped to serve as targets for a very special trophy hunt.

Over the course of harrowing days on the run, Jack is forced to reconsider his views, but the book oddly pulls its punches. Even faced with his potential demise, Jack doesn’t vow to quit hunting altogether—hunting for meat is deemed OK, even by his murderous opponent. Jack’s only epiphany is pondering the righteousness of hunting for sport.

Despite this jarring distinction, the action in the book’s second half is cinematic as Jack and his companions flee two skilled bow hunters who have been told the men are violent criminals. The action is punctuated with grisly deaths and a vicious cat-and-mouse game between Monroe and Jack.

This is probably not the thriller for animal activists, but respectful hunters and thriller readers will discover a slim but animated horror-adventure-with-a-conscience in The Trophy Hunted.