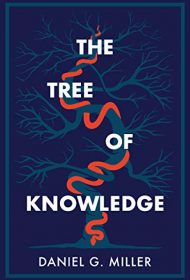 Daniel G. Miller’s new novel The Tree of Knowledge follows three academics as they race to recover a powerful book.

When a murder victim is found holding a coded game tree—a chart designed to aid logical decision-making—Princeton University logic professor Albert Puddles is asked to assist the investigation. Albert solves the code with help from his graduate assistant, Ying Koh, and his mentor, Angus Turner. Angus quickly realizes it’s the work of Eva Fix, the daughter of his former lover, Cristina Culebra. Albert, too, has a connection to Eva, as she had an unrequited crush on him when they were both in Angus’s class. A child prodigy, Eva was shattered when Albert refused an invitation to her quinceanera.

Cristina is now a populist candidate for governor of California, with dictatorial ambitions. The key to achieving her goals lies in a book in Angus’s safe deposit box: coded notes for a complex game tree that outlines the way to absolute power.

When Eva steals the book and frames Albert, he, Ying and Angus go on the run together, hoping to recover the book and clear Albert’s name. Angus’s military friend gives them shelter on his Vermont farm and whips Albert and Ying into fighting shape to thwart Cristina’s plans.

Like many high-concept thrillers, this story has some over-the-top elements. It’s hard to believe that one instance of long-ago romantic rejection made Eva a coldblooded power-monger, or that both Cristina’s and Eva’s former love interests would be Princeton logic professors.

Many of the characters, though appealing, are fairly one dimensional. For instance, Albert is defined by his love of order, Brick by his no-nonsense, tough guy air. A notable exception is Ying, who has a relatively complex backstory.

Even so, the novel’s pace never lets up, entertaining logic puzzles are scattered throughout, and the dialogue is fresh and occasionally laugh-out-loud funny. Readers willing to suspend their disbelief regarding the aforementioned issues will find rewards here.