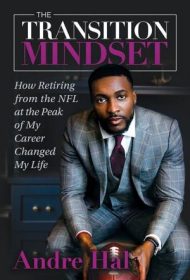 Many know Andre Hal as the NFL player who came back from Hodgkin’s lymphoma or the talented safety who retired in his prime. But that’s not the whole story. This memoir tells the private details behind Hal’s trials and triumphs and his life goals beyond football.

Hal, now 29, retired from the NFL at 26 when his father’s death brought the realization that he’d been playing more for his father than himself. “The two of us had a very complicated relationship, and football was at the center of it… Now, suddenly, he was gone, and he’d taken my love of the game with him.” He eventually turned to real estate and is getting his MBA.

As Hal writes about his journey, he gives readers a peek into the not-so-glamorous NFL life, full of injuries and long, grueling hours. He writes about the benefits he’s received from yoga and mindfulness. And he weaves life lessons throughout that, he writes, “can translate to any person, from any background.”

For example, about money, he writes: “The surest way to go broke is to never say no. Trying to please everybody? That’s a direct road to the poorhouse.” On cancer, he suggests: [W]hen given bad news or a bad diagnosis, don’t just listen to ‘the experts.’ Investigate the problem yourself.” Particularly refreshing is the author’s statement that success in business is fine, but success as a human being is far more important.

While Hal’s exuberance is contagious, his prose has several flaws. It’s often repetitive (for example, he writes that he was “one of the best cornerbacks in arguably the best conference in college football” more than once). Additionally, Hal leans too heavily on telling, rather than showing; for instance, he frequently tells readers how hard he worked, rather than including vivid details of exactly what it took to conquer challenges.

While such issues impact the book’s overall appeal, football fans will find some interesting stories here, and Hal’s motivational insights could help readers considering their next transitions.