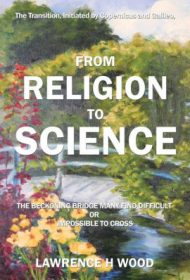 Lawrence H. Wood dives into a deep, if familiar, topic in the history of the planet and its inhabitants with his philosophical treatise on the feud between science and religion, aiming to win readers over to the science side of the dispute.

Here, Wood posits that religion is outdated and unnecessary, that science is fresh and crucial, and that the two cannot cohabit. He begins by positing that from the instance of the Big Bang through evolution to walking, talking, thinking Man, we were content to explain our origins and surroundings through the presence of a supernatural Other (God). Wood explains, though, that once we developed scientific tools—specifically, the telescope—we were free to cast off dependency on religion and live solely in the realm of science.

His descriptions of everything from the Ice Age to splitting the atom leave no room for the co-existence of faith and reason—a stance that shortchanges the religion side. Certainly, some religious traditions firmly adhere to a “young Earth” philosophy and don’t recognize some scientific discoveries, but others do not; they are ignored here. Additionally, while Wood does a nice job of cataloguing scientific milestones, he fails to mention that some scientists responsible for them—including priests and monks—were devoutly religious, and that some of the biggest secular names in science were religious, such as LeMaitre (Big Bang Theory), Mendel (genetics), and Planck (quantum theory).

Also, while Wood correctly notes that the Catholic Church stifled Copernicus and Galileo, he fails to add that Galileo didn’t have the complete facts in presenting his argument, and it was his brash insistence that he was correct that earned him discipline.

The author leans heavily on Wikipedia as a primary source, and provides a glossary, illustrations, and appendix.

Those who enjoy perusing new philosophical thoughts, or who agree with the author, may appreciate this book, but those with a moderate knowledge of science history will likely recognize its flaws.