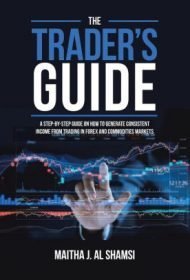 Al Shamsi begins by revealing her own history in trading; having taken an online course, she was successful for a time but then lost her entire investment. After regrouping, she began again, this time developing a set of rules and procedures that she claims can work for anyone. The Trader’s Guide tackles a sometimes-complex subject slowly and logically, summarizing 1944’s Bretton Woods Agreement and the later abandonment of the gold standard, events that paved the way for current financial markets.

As the book progresses, Al Shamsi details her favored tools for analyzing the market and reiterates the importance of creating a written plan and sticking to it. Occasionally, she mentions the availability of additional training courses for purchase at her website, but she shares more than enough information for new traders to get started on their own, even providing her own trading plan and strategies as a sample. With plenty of graphs and screenshots, plus a glossary of market terms, The Trader’s Guide imparts a plethora of information.

Al Shamsi’s writing is candid and thorough, and reads smoothly despite  minor errors, such as using “verses” instead of “versus,” or giving a mistaken credit to Albert Einstein for finance’s “Rule of 72.” In a few places, she neglects basic questions, including discussing a target range of competitive commission rates, or a list of recommended retail brokers, for example.

The focus is on the system, the substantive material that many trading books withhold as bait for other, more expensive educational products. To its credit, The Trader’s Guide is surprisingly straightforward about Al Shamsi’s system and its purported benefits, which include unlimited long-term earning potential with a relatively small investment of time each day. As such, it is a solid primer for those interested in exploring the world of futures and commodities trading.