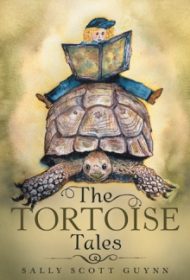 Over 130 years old, Ezra was brought to the U.S. from the Caribbean by pirates when he was young. During his cross-country travels, he gained the ability to communicate with humans from a Native American medicine man. Sally Scott’s (the protagonist shares the author’s name) love of nature inspires Ezra to communicate with her as she explores the woods where he lives.

The protagonists of Ezra’s nine tales include caddisflies, monkeys, various birds, farm animals and imaginary creatures. Key words and their definitions at each chapter’s conclusion help emphasize and clarify the story’s factual lessons.

The most successful stories are those that effortlessly meld fictional characters with animal facts. “The Three Little Caddisflies,” for instance, tells an altered version of The Three Little Pigs while interweaving facts about how caddisflies metamorphose and protect themselves from predators. “Stinky—The Goat Who Would Be Cow” follows the exploits of a misfit goat who lives with a herd of cows, exploring herd behavior while relating Stinky’s attempts to fit in.

Other stories, however, relegate facts to afterthoughts while emphasizing humor or fantasy. “The Boy and the Dragon,” for example, contains some information about fireflies, but the fireflies are mostly props used to help a dragon regain his power to breathe fire. This focus on an imaginary creature muddles the message that nature is fascinating in its own right and could confuse younger children who might assume every animal featured in the story is real.

Guynn’s wildlife conservation background and her way with words provide strong foundations for the book. She is also a gifted artist; the book’s illustrations are charming and slightly and delightfully off-kilter. These attributes lend The Tortoise Tales great potential to appeal to young readers. Revising some of the content would earn it a more solid place in the nature education canon.