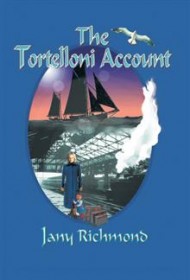 The story opens in 1961 during the collision of two ships not far from the English Channel. Flash forward to 1973. Jane Ashton, whose husband died in the collision, is now a young widow with a 13-year-old daughter, Anna. Jane serves as the personal assistant to John Skifton, owner of Sterling Shipping and other businesses. In quick order, John dies, leaving Jane his entire estate, including the shipping company and a seat on the board of directors of Skifton Estates.

As Jane moves into the executive suite, she faces the ire of the male directors beneath her. She also quickly understands how and why the company is losing money. Shaking things up, she insists on seeing one of the ships as it comes into port and is taken around by a newly hired “watch keeper” named Stone. The chance meeting ignites unmistakable chemistry between the two.

Jane faces daunting business challenges — including an investigation of the company’s overseas “Tortelloni” account, discovered to have been used for money laundering and buying illegal arms. Meanwhile, she and Stone commence a love affair, and the characters grapple with Anna’s kidnapping, a mystery surrounding Jane’s husband’s death, and more.

The author’s knowledge of the shipping business is obvious, and her plot keeps readers engaged. Unfortunately, writing issues mar her work. Often, for example, confusing prose obscures the action, as in: “… at about 2,300 hrs that fateful evening with the visibility confirmed at over a mile and a half by the sighting of a passing ship, incidentally the only ship actually seen during the whole of the watch.” Additionally, important plot twists are sometimes compressed, greatly diminishing their impact.

Richmond has provided a rich landscape peopled with memorable characters. Now she needs to perfect her craft in order to find an appreciative audience.