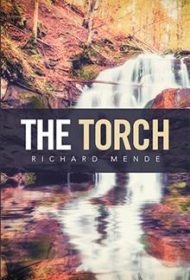 Although the word bildungsroman is used to describe a novel, it seems like a fitting description for Richard Mende’s screenplay, The Torch, which is by all accounts a story of one woman’s spiritual, psychological, and moral development.

The author notes that the screenplay is “a feature-length motion picture intended for major distribution.” Blending elements of Cinderella with Pygmalion and some eastern philosophy, Mende tells the story of Terry, an alcoholic, petty thief, occasional prostitute, and pyromaniac, who deep down wants to be liberated from her vicious boyfriend, her own abusive self-concept, and decades of guilt concerning her mother and father.

Terry is studying the Bhagavad-Gita with the Hare Krishnas when she is arrested for her crimes. In jail, she meets a devotee of Krishna Consciousness who introduces Terry to the spiritual practice of chanting the holy name of God. Terry is eventually transformed by the exercise and is later, serendipitously, released from prison on a technicality. With her newfound freedom and closeness to God she tries to make amends with her parents. Will they reconcile and can Terry leave behind her obsession with fire and attain spiritual mastery over herself?

The Torch is an earnest attempt at screenwriting. The story moves quickly and Mende provides ample stage direction to accompany his dialogue, giving the work a visual feel. But while there are poignant moments (for instance, Terry’s final exchange with her father), the work feels more like a movie treatment than a finished product ready for general readers. The dialogue often seems stilted (for an example, scene 128 where Terry reveals to some prisoners that she was once a prostitute), and many of the characters, such as Terry’s misogynistic and abusive boyfriend, are strictly one-dimensional.

Overall, Mende’s screenplay is an interesting, if flawed read. Whether this will ever make it to the screen is anyone’s guess, but readers will appreciate Mende’s affection for his character Terry, which is apparent from start to finish.