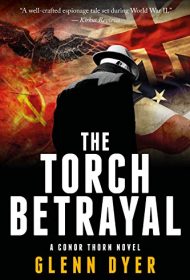 The novel opens in London circa October, 1942, as a mysterious adversary steals a secret document that unveils the details of Operation Torch, the Allied plan to open a second front in North Africa. It’s knowledge that could tip the outcome of the war if delivered to the Nazis—or the Russians, who are lobbying for a second front in Europe.

We meet our hero, OSS agent Conor Thorn after he’s mucked up an operation in Spanish Morocco. Thorn is a fascinating character with a tragic past, yet a man determined to prove his mettle. He returns to London, where he’s tasked by the OSS with locating the missing document at all costs. He also finds himself partnered with equally gifted MI6 agent Emily Bright, a key ally in a battleground that’s as much about deception as conflict. Time is of the essence, as Allied ships are set to invade French North Africa, controlled by the Vichy French, within days.

What follows is a classic spy story in the vein of John Le Carré or Daniel Silva, combining spycraft with reversals, betrayals and secret pacts, punctuated by the occasional gunfight. Thorn and Bright must unravel a conspiracy that leads from the highest levels of Churchill’s government to the heart of Nazi Germany, involving a compromised official, the Vatican, kidnapping and murder. Dyer takes fun advantage of his story’s unique time and place by featuring real-world characters, including British spy Kim Philby, James Bond author Ian Fleming, the OSS’ “Wild Bill” Donovan, and more.

Through it all, the author spins a fantastic spy novel that combines palpable locations like the Cabinet War Rooms with rich, believable dialogue, an unhurried pace and compelling characters. By demonstrating a thorough knowledge of history as well as British culture, the novel more than justifies the inevitable sequel.