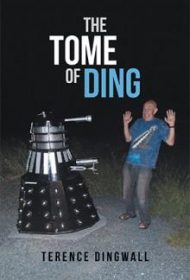 In his memoir, The Tome of Ding, Terence Dingwall relates a series of anecdotes about his life.

Dingwall was born in 1949 in the Seychelles and raised in Kenya. The family fled the Mau Mau insurrection and emigrated to New Zealand in 1964, where he joined the Royal New Zealand Air Force (RNZF) at 18. After a 20-year military career, he and his family settled in Australia.

This memoir describes Dingwall’s family history, his youth, RNZAF service and post-military years. The author offers hundreds of short reminiscences arranged mostly in chronological order, though often unrelated (e.g., one item might discuss finding a kayak, the next trapping possums.)

If there’s a constant theme here, it’s motorcycles. Dingwall is a serious cycle enthusiast and much of the book focuses on bikes he has owned, rebuilt, raced and ridden for fun. He writes about riding with an admirable passion (he proudly points out that he accumulated more than 30 speeding tickets and $10,000 in fines). But between all the jargon, detailed discussion of tire specs, shocks, carburetors, clutch plates and other minutiae, casual readers are likely to feel lost. For example: “This was the most powerful model of the 650 twins, coming out standard with a 10.5/1 compression ratio, initially fitted with Amal GP carburetors.”

When the subject isn’t motorcycles, the offerings are uneven. Some of Dingwall’s stories, such as his family’s background, are pedestrian, but others are smart and entertaining. For example, writing about the first day of boarding school, he says, “Then ensued a peculiar ritual where little Johnny was told to see his dorm matron—just for a few minutes—followed by the revving of engines and the squealing of tyres as each dastardly family made their devious getaway from their dejected progeny.”

Ultimately, The Tome of Ding’s audience seems to fall into two categories: family and friends who will enjoy his life story and motorcycle devotees who can appreciate translating octane into compression ratios.