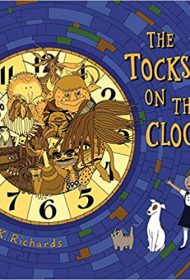 The Tocks on the Clock is a picture book in the vein of Dr. Seuss. It focuses on the concept of analog clocks. Zany characters, upbeat rhyming text, and pictures that wow with color and imagination create a magical mix.

The story begins with the young narrator noting that “The arms on my clock point to different spots./ Someone lives at each./ I call them the Tocks.” Then, with her dog and cat, she meets quirky creatures associated with each hour on the clock. For example, at noon they meet a “Phloon” who lives “on top a blue dune.” At one, they meet the “Grun” who “works a ton.” The ending returns them to 12, just a tick away from a new day.

The book’s standout feature is the wildly imaginative illustrations. The madcap monster-like creatures are indescribably loony but not too scary. Delightful details can be discovered in the images, adding humor to the story. For example, a boy at the zoo is drinking “Gnu goo,” and a calendar features a picture of a boat labeled “Rat Ship.”

Educational elements in each picture add further layers: Timepieces of various types include a sundial with Roman numerals and London’s Big Ben. Habitats like oceans, jungles, and forests are highlighted, each containing native flora and fauna. A map of The Land of Tocks brings an element of geography, and humans of different skin tones add a touch of diversity.

Occasionally, the rhyming is a bit strained. However, the book ends on a lovely, lyrical note: “With twelve hours passed,/ by the light of the moon,/ at the end of the day,/ and the start of a new […]/ One more tock on the clock/ brings tomorrow to you…”

Although the story offers no profound message, the text is immensely entertaining and witty, and the illustrations are kooky, colorful, and creative. Together they make for a charming addition to the picture book genre.