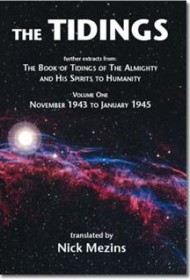 Translator Nick Mezins’ parents were involved in a circle originating in Latvia that claims to have received a series of revelations from the spirit world beginning in the WWII years. The circle eventually relocated to the U.S., where communication with the spirits continued until 1971. This book represents a third volume of the material, called “Tidings,” that the spirits allegedly revealed to the small group known as “the heralds.”

The spirits that spoke to the circle included such figures as Dante and Pushkin, as well as less illustrious entities. Much of the book contains stories and parables that illustrate the spirits’ teachings, which, the text claims, constitute a new religion. However, readers will be surprised to read on page 397 that these tales have “little significance” in comparison to the volume’s expositive teachings.

These teachings resemble certain strains of ancient Gnosticism. They posit a complete division between spirit and matter, and the superiority of the spirit world over the material one. The spirit world and the realm of matter are bridged in the human person, a tertium quid, a being both material and spiritual.

The Tidings also speak a great deal about the “genius” – human beings of exceptional talents who lead the way for the rest of humanity – and the need to nurture these geniuses. A new model for relationships, without the rigidity of traditional marriage, is another important theme.

Unfortunately, many of these themes seem dated and underwhelming. The notion of the genius has the air of 19th century Romanticism. And from the sexual revolution a half-century ago to today’s wider acceptance of same sex marriage, there’s been a re-evaluation of what were once considered “traditional” relationships. Some of the Tidings that probably seemed like revelations in the WWII era are old news now.

While solidly written, the dated material is likely to prove unenlightening to many readers. Those strong believers who are unfamiliar with, or willing to overlook, the well-trod material here, however, may glean some food for thought in these pages.