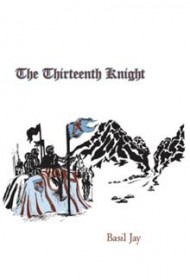 Basil Jay’s scope is ambitious in The Thirteenth Knight, a fantasy that ranges from the doldrums of rural Sunday school to a mystical realm populated by noble knights performing epic deeds.

Jay’s work boasts the standard elements of a good fantasy epic, and his style feels informed by J.R.R. Tolkien and other greats of the genre. He spins a tale of the kingdom of Arac in High World and a young kitchen boy named Synod, who saves his realm from invasion by the evil King Orcam. He writes of Synod’s crowning as king and the threat of invasion that looms for generations. Finally, he tells of a prophecy that spells out the land’s only hope for survival.

It’s a complex mythology that would make for a lengthy tome on its own. But Jay incorporates another element into his story, a modern and relatable hero: Jeremy, an imaginative 12-year-old English schoolboy who discovers a pointy-eared, elfin creature sitting on the banks of a river in his small town.

The creature, Pimm, serves one of Arac’s 12 noble knights, a hero named Prince Gemree who had been struggling to find a certain magical charm and save the kingdom. Jeremy’s fate is tied to Pimm and the mystical realm, and he magically travels to Arac, where he becomes the prophesied 13th knight.

Jay does a fair job of tying these disparate strands together as he creates a detailed mythology in fewer than 300 pages. But the pace of the story feels rushed because of the sheer amount of history, characters and myths stuffed into a limited space. The effect can be overwhelming, although Jay makes up for it with moments of genuine excitement and dynamism. For those with patience for such issues and a memory for detail, Jay’s bold narrative efforts may pay off.