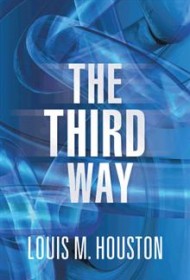 Louis M. Houston is a research scientist who applies his training in physics and his studies of Buddhism to a range of philosophical questions in The Third Way. He posits three “ways,” or disciplines, that control the physical body, the emotions and the intellect, respectively.

Basically, Houston’s third way “is a metaphor that transforms physics into psychology.” He holds that thoughts are like “charged masses,” which allows him “to use basic physics to describe the interactions of thoughts.” This assumption enables him to apply the principles of physics to a range of concepts that are traditionally the bailiwick of religion and philosophy.

As such, Houston’s book is an extended analogy, and arguments based on analogy are inherently weak because they rely on the reader’s acceptance that “A is like B.” A is always like B in some respects and unlike B in others. To the extent that A is unlike B, the argument falters. The book also assumes a solid knowledge of physics. For example, to apply the principle of abiadic cooling to psychology is meaningful only if the reader knows what abiadic cooling is.

Written in terse, declarative sentences, the book does not present evidence for many of the author’s premises, simply stating them without entertaining alternative viewpoints. For example, the author holds that hate is the opposite of love. An alternative view is that the opposite of love is indifference. The author’s conclusions about the nature of love and many other topics depend on his assumptions.

Houston’s work, in the tradition of other physics-meets-philosophy books such as The Tao of Physics and The Dancing Wu Li Masters, might hold the interest of readers who know physics and are willing to accept his grand metaphor. Despite the claim that the book is “designed to imprint concepts even if they are modestly understood,” the reader who understands physics only modestly will find this hard going.