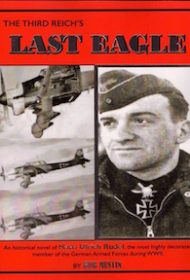 The narrative unfolds chronologically, focusing on Rudel’s war experiences while offering some backstory. Readers glimpse Rudel’s youth, love for his family, and relationship with a father whose political views late in the war might have provoked Gestapo arrest. There’s much from-the-cockpit action, plus insight into Rudel’s leadership skills as he advances in rank. The story follows Rudel in Berlin, interacting with Goering, Hitler, and other Nazi leaders; the protagonist is sketched as so forthright—and famous—he’s able to defy direct orders from Goering and Hitler.

The writing is straight-forward, with simple sentence and paragraph structure and convincing dialogue. Historical fiction calls for accuracy, and even those highly familiar with WWII events will work hard to find errors. Rudel fought on the Eastern Front, and the author’s depth of research is evident as we see Rudel in places as far-flung as the Russian steppes and near Romanian oilfields, complete with vivid descriptions of the cold and heat, the people and Rudel’s fellow flyers.

There are buy-ins, however. Rudel’s character isn’t nuanced enough to show any feelings he might have had about killing hundreds, possibly thousands, of enemy soldiers. Second, while Rudel isn’t depicted as especially political, he’s portrayed as if he believes Auschwitz and other death camps were simple “work camps for Jews.” While a hero in his country,  he worked for a nefarious cause. (Online biographical information also shows that he supported post-war neo-Nazi causes).

Mustin lends humanity to Rudel; he was courageous, loyal, and apparently loved his family. But he was a Nazi through and through. This stance is likely to deter many readers. Those who can set that aside will find an engaging read, and military history fans will likely appreciate the story’s accurate depiction of events.