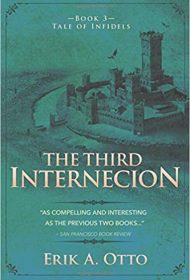 The world has turned upside down, and the days of chaos and strife are fast approaching in The Third Internecion, Erik A. Otto’s latest entry in his absorbing Tales of Infidels series.

After detailing the dense mythology of the fictional world of Matteo’s Lands and offering an indepth view of its inhabitants in the first two books, Otto continues the same tone and pace with another immersive dive into a richly imagined universe. At this stage in Otto’s story, ancient prophecies spelled out in a religious text known as the Book of Canons have come true in dramatic fashion, and a final, dangerous denouement awaits. As a predicted period of trouble and suffering known as “The Third Internecion” approaches, a widening cast of characters is pulled into epic battles and mortal conflicts.
.
This time, the tale unfolds through the vantages of military personnel and those fighting for the truth, including Timothur (“The General”), Paulo (“The Purveyor”) and Aisha (“The Commander”). This group connects with protagonists previously detailed, a group branded as “infidels” racing to find the truth behind the Book of Canons and bizarre reversals in their physical universe. Here, that quest pits orthodox believers against iconoclasts; it also sparks massive battles that Otto describes in detail.

There are enough epic battle scenes and gruesome monsters in this third book to satisfy even the most veteran fantasy readers. What sets this entry apart, however, is the author’s commitment to the mythology and complexity of his imagined world. After the blood of valiant heroes spills in battles against gruesome monsters, the religious student from the first book – a “Truthseeker” named Sebastian– offers revelations about his world’s sole religious text and its hallowed religious authority (a figure known as “The Shepherd”). These insights strongly hint at a continuation of the universe and may leave dedicated fans clamoring for another entry.

In the meantime, Otto has achieved an impressive narrative feat. Thanks to the author’s detailed narrative style, thorough characterizations and his knack for devising compelling actions, this third entry leaves readers fully satisfied.