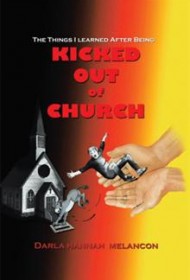 After her son was sexually molested by a fellow churchgoer at a Charismatic Community Church, Darla Hannah Melancon and her family sought guidance and solace from the church pastors. Instead, they were discouraged from talking about the situation — even to the police. They were blamed for letting it happen, told to just forgive and forget, and eventually quietly kicked out of the church.

Using the Scriptures as her guide, Melancon works through her feelings and experiences here, but not always in the most direct way. Most of the chapters start with a retelling of a specific Scripture story and then Melancon relates her own story that applies to the passage. Sometimes she directly talks about her son’s molestation and how it relates to the Bible stories, but often she uses other stories from her life to indirectly address the issue.

For instance, in the chapter on forgiveness, she uses a mundane argument she had with her husband over a piece of cake, which eventually led to a major rift in their marriage, to address reconciliation and restoration. The incident was far removed from her son’s molestation, but effectively illustrates the concept, nonetheless. As she states, “The ‘piece of cake’ issue may seem petty, but God used it to reach some big hurts and teach us some important lessons.”

Melancon’s well-written book is clearly directed at those who have an active relationship with God. It’s not for readers who aren’t familiar with the Scriptures, and some may stumble over her indirect approach. But anyone struggling with separating the harmful actions of a church from God may find solace in Melancon’s writing.