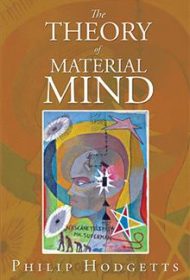 In The Theory of Material Mind, Philip Hodgetts conveys experiences with various paranormal phenomena and synthesizes a theory to attempt to explain them.

Hodgetts suggests that all living things are connected by what he calls “psychoplasma,” which is in turn composed of bioplasma secreted by the cells of every living being. Additionally, a distinct consciousness resides in each of us, which he dubs “the god within.” The author claims that through harnessing these components, he has contacted spirits in the afterlife, performed telekinesis, executed corporeal teleportations, and experienced other psychic events.

It’s unclear what Hodgetts aims to achieve with his book. On one hand, he tries hard to persuade critics, but on the other, the book reads more like a personal journal, most likely of interest to dedicated enthusiasts of New Age metaphysics and parapsychology.

Although Hodgetts is widely read, well-versed in the likes of Bertrand Russell and David Chalmers, his arguments won’t convince an educated skeptic. He suggests at the outset that all things in the universe are connected but states it as a generally accepted premise when it is, in fact, one of the conclusions he needs to derive in order to support the rest of his arguments. And although he demonstrates familiarity with Rene Descartes and mind-body dualism, he fails to appreciate the implications, as demonstrated when he states that the god within is “entirely metaphysical” with “no physical existence whatsoever” —while never explaining how it’s possible for a non-physical thing to affect something physical.

Hodgetts argues eloquently for a balance between feelings and rationality, sometimes accusing critics of falling under the tyranny of reason. Why, then, write passages in the form of logical arguments, in the style of an analytic philosopher?

The Theory of Material Mind is well-written and erudite, but in the end its target audience is unclear: it’s unconvincing for skeptics and too pedantic for those who already believe in possibilities of the paranormal.