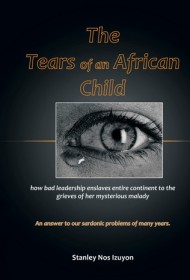 Stanley Nos Izuyon was among countless young African children born into impoverished, non-literate villages in Nigeria. After his father died when Izuyon was two, his mother left for Belgium. When the boy reunited with her there 10 years later, he discovered a different kind of free world, one he fervently desires for his people in Africa. His quest, starting here, is to help break Africa out of poverty and encourage its people to join the fight against political enslavement toward a more democratic society.

The book opens with a passionate prologue where Izuyon appeals to Africa to regain its lost glory. “Look at the bundles of broken humanity that we produce every year because of poor education, poor background, and poor parenting and poor leadership,” he writes. He adds that it’s time to dethrone the “old political vampires who are parasites to our national growth.”

The balance of the story has a Mr. Smith Osaze from Nigeria conversing with talk show host Blair Camborah of the African Transmission Network about 21-year-old Stanley’s ideas in his book The Leadership in Africa and the Tears of an African Child. Inspired by his words, they and the show’s callers weigh the problems of corruption, poverty, disease and the need for education and innovation to move the continent forward.

As English is not his native language, Izuyon writes in a manner that is both mesmerizing and confusing. Parts of the book are poetic; others include both invented and misused words (example: “respondent in a cream colored suit.” Resplendent?) His passion for his subject is clear, but what is not is whether this long conversation between the talk show host and guest actually happened or if that is from his imagination.

While The Tears of an African Child shares important and inspiring ideas for those interested in improving the plight of the African people, it needs substantial reworking for those ideas to be better understood.