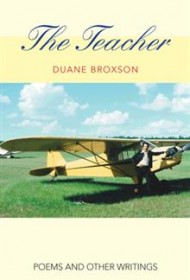 In the preface to The Teacher, science teacher Duane Broxson gives readers a sense of how spirituality and science have come together for him in one grand quest: “I began to see a connection between the metaphysical aspects of quantum mechanics, the great physicists search for ‘truth’ about our universe and our own spiritual search for the essence we called ‘God.’”

Though “poems” comes first in the subtitle, the majority of the book consists of prose writings. These include memoir pieces, such as “To University Hospital,” in which Broxson declares, “Great things were accomplished by University Hospital regardless of its financial struggle. It was a privilege to have worked there” but does not provide engaging details or vivid anecdotes.

Broxson’s poems tend to be brief. Many include Christian allusions and are ardent in tone but remain somewhat impersonal, as in “I Am Poured Out,” in which the speaker proclaims, “Oh Lord, /… I am broken like the pot shards lying on the Holy Hill…” .

Almost half of the book contains Broxson’s letters to the late evolutionary biologist Stephen Jay Gould and other scientists and institutions. In these, he questions behavior and morality, as in a 1992 letter to Gould in which he asks, “Why do we reflect with agony on some of the aspects of our conscious and unconscious struggle for survival? Are not lies the protective coloration of our own selfish selves and deception the tool of our selfish intent?”

The poems in The Teacher lean toward the overly sentimental and the essays sometimes lack enough specific examples to support Broxson’s assertions about human nature (there are also misspellings). In addition, Broxson’s tone often veers into the self-righteous or pedantic. But these flaws are balanced to some degree by the genuineness of his quest. Although not likely to attract a general audience, The Teacher might appeal to those interested in exploring intersections between evolutionary ideas and spiritual struggle.