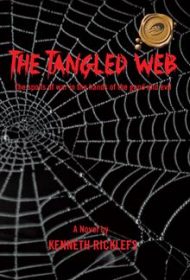 This complex stew of a mystery novel is about greed, secrecy, complicated family ties, and how the sins of the fathers are visited upon the sons.

Peter Jameison loves his orderly life where everything is in its place. But that changes quickly when his housekeeper is attacked and knocked unconscious in Peter’s Brighton flat. What follows is a jumble of mysterious, often violent events that leapfrog through England, Ireland, France, Columbia, Venezuela, and the U.S. and shift from present to past to present again.
Readers learn that the “tangled web” Jameison and his associates are caught in was spun by his father and his confrères at the end of WWII when they discovered and kept a Nazi fortune. The situation has been simmering for 60 years, and when it comes to a boil, readers will find themselves guessing over who is doing what, where, to whom and why. In Agatha Christie style, all the answers are revealed at the end.

While the conceit holds promise, the story is hampered by many writing issues. The novel is overstuffed with characters (throw in a few deceptions, such as two characters turning out to be only one who was using an alias, and utter confusion ensues). Likewise, a plethora of plot twists, deceptions, misunderstandings and scene changes threaten to overwhelm readers.

Throughout, the author includes overdone descriptive passages and a wealth of unnecessary detail (is it really important for readers to know what the characters ate for lunch?) Additionally, the narrative frequently and inartfully shifts points of view, lacks smooth transitions between scenes, and is replete with spelling and grammatical errors (e.g. the opening sentence: “Peter had just returned his car to the parking garage, which he leased space after he had bought the Georgian flat three years ago, after three years he was still restoring.”)

In sum, the book requires thorough editing and proofreading before it can fulfill the promise of the author’s imagination.