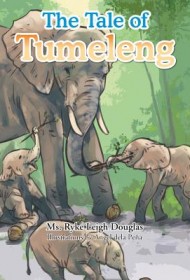 Ryke Leigh Douglas’s outstanding picture book The Tale of Tumeleng tells the story of a young elephant named Tumeleng growing up in Africa. While elephants are commonly depicted creatures in children’s literature, such famous characters as Babar and Elmer are characters first and elephants second. By contrast, Douglas manages to make Tumeleng immensely appealing while preserving her animal nature, recounting a realistic sequence of events in the young elephant’s life.

The book begins with Jabari, a male elephant, defending the herd from hyenas. When Jabari’s daughter Tumuleng is born, the young calf tries to keep up with the herd as they move to a new waterhole. Tumeleng’s mother, Ayanna, guides her, and Douglas captures Tumeleng’s place in the herd perfectly: She is cared for, but she must also learn quickly and work hard so that she doesn’t slow the herd. After some exciting encounters, the book ends happily as Tumeleng and her family take in Rafiki, an orphan whose parents were killed by poachers.

Douglas’s prose is gentle and evocative, giving readers an impression of the real dangers and problems elephants might face without ever ringing a false note. By the time a few pages pass and Douglas begins using quotation marks to show what the elephants are saying, readers have gotten to know the elephants and it seems natural to know their thoughts intimately.

The illustrations are excellent, with realistic-looking elephants easily discernible from one another, and the visuals carry a sense of excitement throughout Tumeleng’s adventures.

The book is generally well-edited, except for a few stray commas, as in: “Zonda, gathers her frightened and sad family together [..]”  These don’t spoil the rhythm or the suspension of disbelief, however, and The Tale of Tumeleng hits the mark. Children, particularly those in grades 2-4, will enjoy this fictional glimpse into the lives of these grand and majestic creatures.