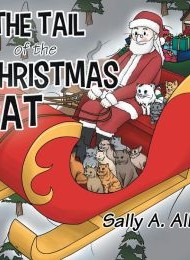 Author Sally A. Allen addresses a familiar dilemma in her picture book The Tail of the Christmas Cat, the story of a cat ostracized for looking different than the others.

Whiskers wakes up Christmas Eve morning to discover that his tail is encircled with green and red rings. Unable to remove them, Whiskers is hissed at by his companion cats “because he was different.” Upset, he goes to the ranger station to see if they will take care of him.

Because of his tail, the rangers declare him a “Christmas cat,” name him Nick and ask the Claus family to take him in. Santa readily adopts Nick, picking him up in his sleigh. Santa soon realizes that Nick misses his friends and guides the sleigh to the cat cave. There, Nick asks if the other cats can come along, and Santa flies off with all 13 cats, declaring: “Now I have plenty of help to deliver the children’s presents.”

The story is cute and fast-paced but contains several flaws. The origin of Whiskers’ tail rings is never explained. As shown, they look like plastic bracelets or elastic bands that could be easily removed. Since they aren’t removable, one might expect a magical explanation, but instead the question is simply ignored.

In addition, there’s no apology from the cats for having turned on Whiskers (although at one point they surround Nick and “purr with forgiveness”; perhaps the author meant “purr for forgiveness”?). Whiskers’ longing for their company makes him seem unpalatably needy.

The text first describes the cats living in an “igloo,” while “cave” is used thereafter. And although the illustrations are adequate, snow is indicated only by the ground changing from brown to white, which resembles light shining on a surface more than snow accumulation.

Allen’s narrative is pleasant and may hold some appeal as a holiday story, but it could have benefited from a thorough edit to address the issues mentioned.