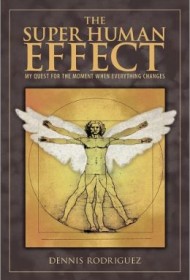 In The Super Human Effect, Dennis Rodriguez details his difficult decision to leave his job as a successful college administrator and undertake an in-depth, transformational, spiritual search. Giving himself a 60-day countdown before he hands in his notice, he writes a very personal nightly blog in which he deconstructs his life’s journey – from his childhood in the Bronx, college and graduate training as an actor, starting a family and enjoying professional accomplishments – right up until the point where, influenced by the work of Wayne Dyer, Ram Dass, and Deepak Chopra in particular, he stops wondering and starts planning how to live in a more enlightened way.

The first two-thirds of his book covers these two months; the rest is comprised of entries setting forth his hopes and modus operandi for this new life as a writer, life coach, and healer. A deeply religious Catholic, Rodriguez notes that he possesses a psychic gift activated by prayer which allows him to dream, or sense via touch, the future for friends, family, and co-workers, and this is a significant component in his re-invention of self and career.

Readers who embrace the inspirational self-help works of the human potential movement and books by spiritualist James Van Praagh will find much to like here. Rodriguez’s narrative is inspiring, and the memoir offers a real warmth of character. There are, however, some problems inherent in printing and binding a blog and releasing it as a book. (For example, in his blog entries, the author often promises to provide “the rest of the story tomorrow,” which can be vexing. In addition, the blogs’ many flashbacks, which appear thematically rather than chronologically, detract from the book’s timeline.) Careful editing would have enhanced the author’s message without forfeiting any of its intimacy or immediacy.