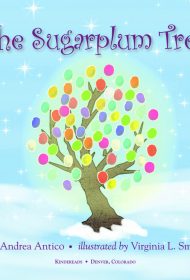 Andrea Antico’s children’s picture book The Sugarplum Tree tells the story of a tree that gets a magical makeover, courtesy of the Sugarplum Fairy.

In a forest mostly filled by lush evergreens, there’s one tree that loses its leaves in fall. The tree, now bare, is ignored and miserable, as children play near the evergreens and decorate them for the holidays. But soon, the Sugarplum Fairy, passing over the forest, decides to cheer up the sad tree and transforms it into a “sparkling sugarplum tree.” The tree’s branches become stronger, draped with colorful sugarplums, and the children and forest animals celebrate its good fortune. Later, the children use some of the sugarplums to make treats for family and friends.

The story is simple and pleasant, but its message seems a missed opportunity. The children never express regret for ignoring the tree and only flock to it after its magical transformation. Additionally, the tree doesn’t help solve its own plight; its salvation comes strictly from the Sugarplum Fairy’s good graces. Children may learn about kindness, however, from the Sugarplum Fairy’s rather effortless act of compassion.

While the story never explains what a sugarplum is, the text provides a general idea, describing some children making sugarplum treats “by adding sliced gumdrops, raisins, or pieces of dried fruit to their favorite cookie recipe,” while others “mix gumdrops and popcorn for a delicious, easy and colorful sugarplum treat!”

The book’s final pages contain tips on how to get the most out of the story, including song and craft ideas. The art is colorful, attractive, and showcases inclusivity by depicting a wide variety of children and adults. One picture is jarring, however, showing children picnicking under the massive branches of an evergreen tree many times larger than any others depicted.

The Sugarplum Tree doesn’t break new ground, but it delivers a tale children will enjoy reading at Christmastime.