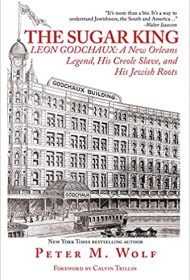 In The Sugar King, Peter M. Wolf traces the life of his great-great grandfather Leon Godchaux, a penniless, illiterate Jewish immigrant from France who created a New Orleans business empire during the 19th century.

To escape poverty, 13-year-old Godchaux came alone to America in 1837 from a small village in Alsace-Lorraine. After peddling wares in the Louisiana countryside, he opened a small general store, establishing a New Orleans clothing store seven years later. This led to successful retail, wholesale, and manufacturing operations.

When civil war appeared imminent, Godchaux safeguarded his assets by investing in gold on deposit in New York and limiting exposure to Confederate currency. This foresight allowed him to emerge greatly enriched in the post-war years, and others turned to him for loans. After bailing out a debtor, he acquired a sugar plantation, and by the time he died in 1899, Godchaux had modernized the local clothing and sugar industries and amassed a fortune.

Godchaux’s success is even more remarkable given that he never learned to read or write in French or English. He relied on employees, including Joachim Tassin, a former slave who worked for Godchaux’s clothing business. Their lifelong friendship benefitted both, as Tassin learned the trade while helping attract Creole customers.

An accomplished author, Wolf places Godchaux and his work in the context of the era’s political, social, and economic conditions. He also corrects inaccuracies in the historical record about Tassin’s past and points out that although Godchaux eschewed slavery in his commercial endeavors, he used slaves as household help.

The narrative includes a few unnecessary distractions, such as intermittent personal asides and conversations cumbersomely framed by disclaimers, such as, “he likely said” or “she would have said to him.” These are quibbles in a largely well-wrought story.

In sum, this well-researched biography sheds light on an influential business figure and the immigrant experience in America. The book includes a foreword by Calvin Trillin, archival images, timeline, descendant profiles, bibliography, and index.

BlueInk Heads-up: This title would make a nice addition to southern history and business history collections.