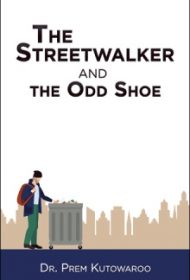 The Streetwalker and the Odd Shoe is a novel based on the true story of a homeless man in London.

The story begins with Mark, aged 14, choosing to live on the streets. His father has physically abused him for years and so, with the help of his half-brother Steve, Mark takes a train to London and cuts off all family contact. All he takes with him are some clothes and a family ornament—one-half of a tiny pair of shoes. Mark and Steve promise to keep one each so they can recognize each other if they meet again.

The novel then follows Mark’s first-person story of decades of homelessness with occasional shifts to Steve’s life as he becomes a doctor and has a family.

The story’s greatest strength is Mark’s account of his life as a homeless person (while the author uses the term “streetwalker,” Mark isn’t involved in the sex trade). He’s a gentle, resilient character, reliant on his quiet religious faith. Determined not to steal, drink, smoke or take drugs, he survives by begging, scrounging for food, washing in public toilets and ponds, and sleeping in parks. The descriptions of him struggling through cold, snowy winters are poignant.

Yet Mark’s street life is oddly without incident. He repeatedly decides where to beg, talks about what he eats, looks for somewhere to sleep, etc. And while his constant concern to find toilets shows the difficulties of street life, the point is heavily labored. When Mark occasionally interacts with others, or the story switches to Steve, the dialogue is stilted and the characters flat.

The novel also suffers from copyediting errors (e.g. Mark’s dead mother is called Helen and Sonja on the same page) and odd language choices (when Mark begins begging, he calls it asking for “alms”).

While the story could use more dramatic pull, those wishing to consider the difficulties of living on the streets may find Mark’s story of interest.