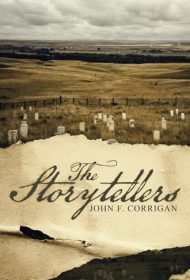 Set in the spring of 1877, The Storytellers follows an expedition to the site of the Battle of Little Bighorn, where Custer led a few hundred men into an encampment of thousands of Sioux and Cheyenne. Custer knew the odds and still proceeded. None of the soldiers survived. Why did Custer do it?

Corrigan’s answer is told through his fictitious New York private investigator, DelCol. He’s hired by the company that sold life insurance policies to Custer and some of his men, to investigate what happened that day and why.

Smart and witty, DelCol also has an outstanding sense of smell that allows him to reconstruct a person’s movements, motives, and profession from rich olfactory information. Hiding his real mission, he joins an army-led expedition returning to the Little Bighorn battlefield months after the battle to properly bury the men who died. In the process, he gathers the stories of anyone who will talk to him, including colorful characters from true history, such as Sitting Bull, who invites DelCol to hear the Sioux side of the battle.

The closer to the truth DelCol draws, the more that less savory forces hound him, some paranormal and some frighteningly incarnate, especially one determined assassin.

The story is propelled with visceral details, surprising plot twists, likeable characters, and taut pacing. Corrigan’s dense historical details—and footnotes—also enhance the tale. There are just two quibbles: When DelCol revisits events with new witnesses, repeated historical details slow the story. And for all the early exposition about DelCol’s epic sense of smell, after the first 100 pages it practically disappears until much later in the story.

Overall, though, Corrigan delivers a fast-paced mystery that vividly explores a pivotal event in American history. Lovers of westerns, mysteries, detective novels, and American history will greatly enjoy The Storytellers.