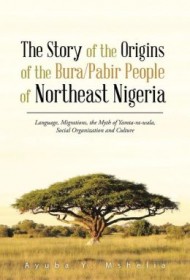 In this book, Ayuba Mshelia discusses the similarities and differences between two very close north Nigerian cultures, the Bura and the Pabir/Babur, examining their remote and recent history, language, customs, and social organization.

Descending from both gene pools, Mshelia has first-hand knowledge of the topic. He was born in Nigeria, later immigrated to the U.S., where he received a doctorate from Columbia University and is now a professor at City University of New York.

The book begins with chapters on the African languages and their classification, attempting to explain certain phonological peculiarities of the Bura language through its history and linguistic affiliation. The chapters that follow, filled with historical detail of migrations, wars and powerful dynasties, discuss the rise and fall of the Kanem and Bornu empires and the Mandara kingdom, the historical predecessors of the Bura/Pabir people, hoping that “this might shed light on the critical distinctions” between them. Mshelia then offers an informative description of the tribal household and local industries of the Bura/Pabir, including their religious practices, witchcraft and healing rituals, and other customs.

Mshelia devotes much attention to the linguistic affiliation of the two tribes and their place on Africa’s linguistic map, seeking to establish a correlation between the distinctions in language and their cultural-ethnic customs. He argues that both languages belong to the Afro-Asiatic language family, as opposed to the earlier claim (Meek 1931, 1976) that Bura/Pabir is a Bantu language belonging in the Niger-Congo family. But this earlier claim has long been disputed, and since most contemporary sources (cf. Blench, 2012, Ethnologue, and others) indeed classify Bura/Pabir as a Chadic language belonging in the Afro-Asiatic family, there seems little need for this argument.

Language and editorial issues slightly diminish the fluency of the narrative, which is often repetitive and could benefit from proofreading by a native speaker.

Readers looking for insight into the linguistic origins of these two groups will find scant original research or data, and, thus, are likely to be disappointed. Those seeking an interesting read about African cultures, however, will find much to appreciate here.