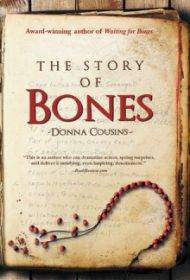 This captivating coming-of-age novel follows a young boy’s remarkable journey from life on a casava farm in a sub-Saharan village to his becoming a safari guide at a high-end African bush camp.

Skinny, angular Bonesy learned early to have a deep respect for living things. From a deadly cobra’s venomous bite to a crocodile’s snatching jaws, he knew the power and stealth of the natural world, and the trauma it could inflict. Unfortunately, Bonesy also becomes aware that the most dangerous creatures in Africa come in human form. The story details Bonesy’s life, where family concerns, antagonistic peers, a love interest, and a rare opportunity for career fulfillment become entwined with an ardent passion to preserve a declining mammoth species.

In this dramatic narrative told in Bonesy’s voice, Donna Cousins proves herself a master storyteller. Artful detail and inquiring dialogue draw us into the heart of a world where elephant ivory is equated to “white-gold.” Cousins’ authentically describes the sights, sounds and aromas of this environment, where the remains of a poacher’s kill carries “a stench so pungent that it seems to possess weight …”. She captures Bonesy’s path with similar descriptive flair. “I saw before me a tricky rope bridge that stretched from my present life to a remarkable future,” he notes in momentary contemplation. “I wanted nothing more than to make it all the way across.”

This is an explorative narrative that deftly renders the bonds of both human and animal emotion. From a father/son bond, to the loss of family and friends, to a mournful elephant herd, “grief was a season that changed over time,” and death gave way to acceptance and the heightened survival instinct.

A solid tale unto itself, The Story of Bones is also an inspirational prequel to Cousins’ earlier release, Waiting for Bones. For all adventurous armchair travelers who enjoy realistic, well-plotted fiction that weaves emotional drama and unexpected twists amidst the toxic climate of animal poaching, this is a powerful, eye-opening journey.