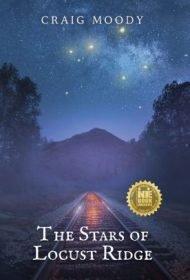 Craig Moody’s third novel, The Stars of Locust Ridge blends the atmosphere you’d find in a quaint, historical novel about the South with difficult themes and alien encounters.

The year is 1971, and 16-year-old Genevieve Delany’s mother works in another city, so Genevieve is left in the haphazard care of her morphine-addicted uncle. During one of these times, she first sees the stars dancing and moving in synchrony over Locust Ridge, Tennessee. Genevieve’s mystifying experiences are often accompanied by black-out episodes, night terrors and physical harm to her nether regions. Soon, she gets expelled, and to finish high school, she must study under Miss Edna, who lives with her partner, Janice. Janice also sees the moving stars.

As the story unfolds, Genevieve experiences first love, or lust, as well as some rather horrific episodes involving both physical and emotional injury. Near novel’s end, little gray men-like alien beings appear to Genevieve, Miss Edna and Janice. While these aliens are mostly benign, the secrets their presence reveal are stomach-turning.

Moody is a basically adept writer, and many readers will find his narrator, 16-year-old Genevieve, likeable. Even as the novel veers toward strange events, Moody’s characters remain engaging.

Still, the narrative has several notable flaws. The novel’s first paragraph is jumbled, as Moody inadvertently switches from past to present tense. More importantly, his word choice and description throughout the story can seem unnatural. For example, getting ready for her first date, Genevieve describes her dress as “extenuating the blossoming curves of my still-blooming womanhood.” As with this example, sometimes Moody’s descriptions are overly poetic, particularly in juxtaposition with the gritty and sometimes gruesome plot points.

The narrator also seems to gloss over the very real trauma she experiences; most women would not be so nonchalant faced with similar disturbing revelations.

Still, this is an interesting tale, and those who can overlook the abovementioned flaws will likely find The Stars of Locust Ridge a compelling read.