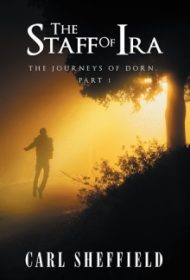 This science fiction novel relates the travels of a shape-shifting alien who repeatedly visits Earth, a planet whose inhabitants he despises.

The story focuses on Dorn, the shape-shifting chief commander of the planet Boldlygo. Although he is the son of Ira (former king of Boldlygo) and an Earth woman, he hates humans and suggests they be exterminated by an engineered virus. Still, inhabitants of his planet cannot reproduce without DNA from human women. To facilitate reproduction, humans, including men, are taken to Boldlygo for lengthy visits, and Boldlygo inhabitants also visit Earth for extended periods. During these visits, Dorn inexplicably sails with Christopher Columbus, helps George Washington, and meets Leah, the Earth woman he eventually comes to love.

Fans of Star Trek: The Next Generation will notice similarities that extend beyond homage. For instance, Dorn (perhaps named for Michael Dorn, the actor who plays “Worf” on the show) lives on planet Boldlygo (likely taken from the Star Trek mission “To boldly go where no one has gone before”). Ira tells council members, “Let it happen,” much like Captain Picard’s famous, “Make it so.” There’s also the Boldlygo rule that aliens may interact with humans, but cannot interfere or alter history (essentially, the Star Trek prime directive).

Writing errors—including run-on sentences, issues with punctuation, tenses, plurals, and wrong word usage (“want” for “won’t,” “your” for “you’re,” “quite” for “quiet,” etc.)—impede comprehension, as do mistakes in formatting quotations and attribution. Many sentences contain multiple errors; for example: “I tried to crossed [sic] until the water reached my neck, It was useless, [sic] it was too deep,” and “Ira was nit [sic] custom [sic] to hearing females speak.”

Because the story is intended as the first of a series, one hopes the author will address these issues before embarking on the next title. As it stands, The Staff of Ira’s derivative nature and technical flaws make for a frustrating read.